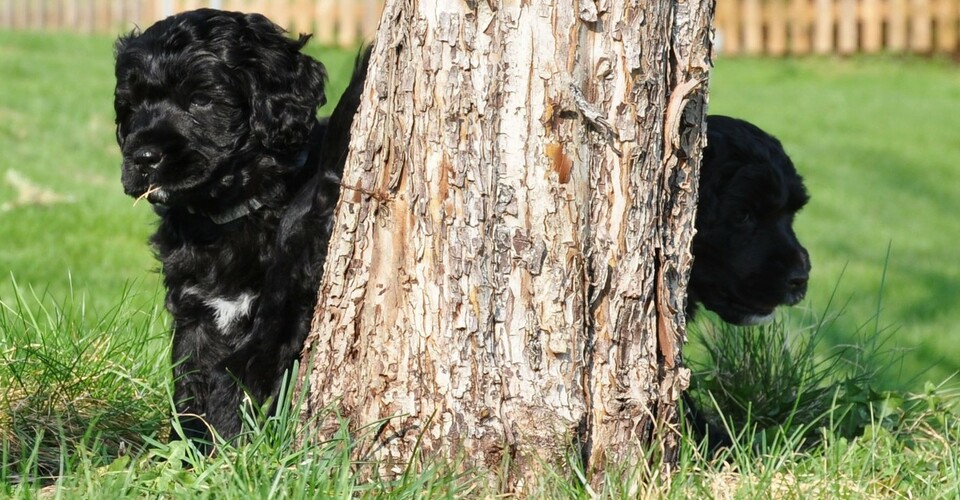 Some breeders claim they are a hypoallergenic dog breed, there is no scientific evidence to support the claim that hypoallergenic dog breeds exist. However, their non-shedding qualities have made them more popular in recent years. While there may not be any scientific backing, this breed is non-shedding, requires extensive grooming and upkeep as its coat grows as does human hair.

The closest relatives of the PWD are widely thought to be the Barbet and Standard Poodle. PWD's are highly intelligent have webbed toes for swimming, and do not shed. However, Portuguese Water Dogs are more robustly built than a poodle, with stout legs, and can have a wavy coat instead of tightly curled. The Portuguese Water Dog built of strong substantial bone and a solidly built, muscular body. Portuguese Water Dog eyes are consistently black, and their coats can be black, brown, white, black and white or brown and white. In Portugal the breed standard does not allow more than 30% white markings. Overall, white is the least common Portuguese Water Dog color, while black with white markings on the chin and chest is the most common color combination.

The hair of PWD's grows continually and requires regular brushing and cutting or clipping. In Sweden the only cut is the lion cut, but in some other countries you can also see PWD's in retriever cut. In the lion cut, the hindquarters, muzzle, and the base of the tail are shaved and the rest of the body is left full length. This cut originated with the fishing dogs of Portugal. This is the traditional cut and the most functional, given the breed's main historical significance as a fisherman's companion. The lion cut diminished the initial impact and shock of cold water when the breed jumped from the boats, as well as providing warmth to the vitals. The hindquarters were left shaved to allow easier movement of the back legs and the breed's powerful, rudder-like tail.

Portuguese Water dogs make excellent companions. They are loving, independent, and intelligent and are easily trained in obedience and agility skills. Once introduced, they are generally friendly to strangers, and actively enjoy being petted, which, due to their soft, fluffy coats, is a favour that human beings willingly grant them.

Because they are working dogs, PWD's are generally content in being at their master's side, awaiting directions, and, if they are trained, they are willing and able to follow complex commands. They learn very quickly, seem to enjoy the training process, and have a long memory for the names of objects. They are generally considered too small to be used as service dogs or guide dogs for the blind, but they make unusually good therapy dogs and hearing dogs.

A PWD usually stays in proximity to its owners, indoors as well as outdoors. This is typical of the breed. Though very gregarious animals, these dogs will typically bond with one primary or alpha family member. Some speculate that this intense bonding arose in the breed because the dogs were selected to work in proximity to their masters on small fishing boats, unlike other working dogs such as herding dogs and water dogs that range out to perform tasks. In any case, the modern PWD, whether employed on a boat or kept as a pet or a working therapy dog, loves water, attention and prefers to be engaged in activity within sight of a human partner. This is not a breed to be left alone for long periods of time, indoors or out.

They are very good companions to people who understand what they need, Portuguese Water Dogs are not for everyone. Because of their intelligence and working drive, they require regular intensive exercise as well as mental challenges. They are gentle and patient — but not "couch potatoes", and boredom may cause them to become destructive.

A Portuguese Water Dog is first described in 1297 in a monk’s account of a drowning sailor who was pulled from the sea by a dog “with a black wavy coat, the hair long and rough, cut to the first rib and with a tail tuft".

The PWD was a breed on the verge of extinction when, during the 1930s, Vasco Bensaude, a wealthy Portuguese shipping magnate, began to seek out fishermen's dogs and utilize them in a breeding program to re-establish the breed. Bensaude's kennel was named Algarbiorum, and his most famous dog was Leão (1931-1942), a fisherman's stud dog who was bred to so many different females that about half of the pedigreed Portuguese Water Dogs in existence can trace their lineage back to him. Bensaude was aided by two Portuguese veterinarians, Dr. Francisco Pinto Soares and Dr. Manuel Fernandes Marques. His work was carried on by Conchita Cintron de Castelo Branco, to whom he gave his last 17 PWD's and all his archives.

Dr. António Cabral was the founder of the Avalade kennels in Portugal. Ch. Charlie de Avalade (Charlie), a brown-coated dog, and C. B. Baluarte de Avalade (Balu) were two of his many famous PWD's. He registered his first PWD in 1954, after Bensaude had pioneered the re-establishment of the breed in Portugal. Cabral worked with Carla Molinari, Deyanne Miller, Sonja Santos and others to establish PWD's in the US.

As with all dogs, PWD's are vulnerable to certain genetic defects. Due to the limited gene pool for this breed, conscientiousbreeders carefully study pedigrees and select dogs to minimize the chance of genetic disease. Unfortunately, like many breeds, a growing popularity has encouraged breeding by people who are not knowledgeable about the breed.

Like many other breeds, PWD's are vulnerable to hip dysplasia. However, the risk of a PWD developing hip dysplasia can be greatly reduced by thoroughly checking the pedigrees and health clearances in both the sire and dam of your dog. Hip dysplasia is a congenital and developmental problem with the hip joints.

PRA (Progressive Retinal Atrophy) is an eye disease found in PWDs. As with hip dysplasia, some lines carry these defects more frequently than others. PRA, which causes "night blindness", may lead to complete blindness. Fortunately this is a simple recessive gene.DNA testing is now available which can identify a dog carrying the gene for PRA. Known as "Optigen Testing" a "normal" or "A" dog does not carry the gene for PRA. A "carrier" or "B" dog carries one copy of the PRA gene and the dog will NOT express the disease but may or may not pass the gene to offspring. An "affected" or "C" dog has two copies of the PRA version of the gene and will probably express the disease as late onset Progressive Retinal Atrophy. A "B" dog should be bred only to an "A" dog to ensure that any offspring will not express the disease.

Juvenile Dilated Cardiomyopathy is a rare, fatal condition caused by an autosomal recessive gene. It affects young dogs, who succumb to heart failure before reaching adulthood. As a simple recessive gene, it has been difficult to identify and was particularly heartbreaking as seemingly healthy puppies would suddenly die, often shortly after joining their new families. Since a recessive gene is responsible, that means if at least one parent is "normal" (does not carry a copy of the cardio version of the gene), its offsprng can't contract the disease.